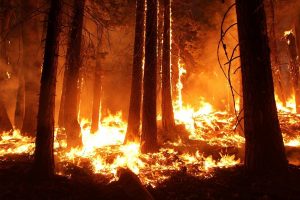 Those who sincerely believe in “anthropogenic” (formerly manmade) climate change are a hard bunch to understand. This excludes those who cynically use environmentalism to promote an overall leftist agenda or to sell books and turn a profit.

Millions of people really await an apocalypse that they see as imminent. They have a deep emotional connection to the movement as a defining part of themselves.

Enter Jem Bendell, climate change advocate extraordinaire. He argues that the end is near, very near. He is the author of Deep Adaptation: A Map for Navigating Climate Tragedy. According to BBC, it has been downloaded over half a million times.

Deep Adaptation argues that “climate-induced societal collapse is now inevitable in the near term.” The culprit is a gradually warming climate. Dr. Bendell cites the claim that “Seventeen of the 18 warmest years in the 136-year record all have occurred since 2001, and global temperatures have increased by 0.9°C since 1880.” He sees that extra degree in temperature as catastrophic because “we need to stay beneath 2 degrees warming of global ambient temperatures, to avoid dangerous and uncontrollable levels of climate change, with impacts such as mass starvation, disease, flooding, storm destruction, forced migration and war.” The only cure would be to expand current efforts, “by a factor of 2 million within two years.”

Since the paper is dated July 27, 2018, his two-year window has nearly expired.

Dr. Bendell has some serious academic credentials. He graduated from Cambridge and is currently the Professor of Sustainability Leadership at the University of Cumbria (UK).

Unlike the alarmism of Deep Adaptation, his more recent writing is melancholic. Consider the first paragraph of the article “A Pandemic of Love – Deeply Adapting to Corona,” posted to his website on March 18, 2020:

“I’ve not been breathing so deeply recently… I’ve been wondering how best to protect myself, loved ones, and participate in wider efforts at change. I’ve felt anger as I witness slow and ethically dubious responses from people with the power to make decisions that matter… But rather than get stuck with blame, I am also hearing of heart-warming action from people all around the world.… we can become part of an exponential pandemic of love.”

These words appear to be the work of a man battling his anger and resignation. Dr. Bendell is not alone. He claims that his “Deep Adaptation Forum” has fifty volunteers and an audience of over 15,000 people around the world.

He sums up his strategy in three words, resilience, relinquishment, and restoration. Resilience refers to clinging to positive attitudes that might survive the collapse. Relinquishment is letting go of those aspects of life that only make the meltdown worse. Restoration is looking to the past to recover aspects of life that will assist us in creating a new society. Among other things, he mentions restoring landscapes to their wild state and changing diets to reflect the seasons of the year.

The BBC refers to Dr. Bendell and his followers as “climate doomers.” It quotes one of his excursions into wishful thinking. “People are rising up in love in response to their despair and fear, [Deep Adaptation] seems to have reached people in all walks of life, at least in the West – heads of banks, UN agencies, European Commission divisions, political parties, religious leaders…”

One is “Rachel,” who cultivates foodstuffs in the small yard behind her home. “I find the more I do it, the less anxious I am. It’s better than just sitting in the living room looking at the news and thinking, ‘Climate change is happening, what do we do?’” Every six weeks, she takes a 450-mile round trip with two of her daughters to an organic farm in Wales, where the children learn to forage. “I don’t say to them that in five years we won’t be here, but they do accept that food will be difficult to find.”

Another follower is Lionel Kirbyshire, who left his career as a chemical engineer and settled with his wife in a small town in Fife. Like Rachel, he cultivates small amounts of food in growing boxes. “We’re not stockpiling food but as the years go on, I can’t see us having much left.” Mr. Kirbyshire draws much of his emotional support from online forums like “Near-Term Human Extinction Group,” where he can share his thoughts with the like-minded. “Sometimes I say that I’m feeling quite low and someone will say they’re feeling the same, so you know you’re not in it alone.”

The Extinction Group’s Facebook cover page states its purpose. “The Near Term Human Extinction Support Group is for people who have accepted that HUMAN EXTINCTION IS INEVITABLE IN THE NEAR TERM due to anthropogenic global warming (AGW) and the consequences, based on trends determined by scientific research… This is a forum for friendly and non-threatening discussion… Discuss, laugh, cry, hold hands, share ideas, and know you are not alone.”

The Despair of Humanism

The Catholic Encyclopedia defines despair as “the voluntary and complete abandonment of all hope of saving one’s soul and of having the means required for that end. It is not a passive state of mind: on the contrary, it involves a positive act of the will by which a person deliberately gives over any expectation of ever reaching eternal life.”

The climate doomers seem to participate in this despair since they exclude any possibility of a Providential God who watches over humanity and guides them to eternal life.

These people are trapped in naturalistic humanism. Their science has no room for God. They only believe in what they see, and that view is bleak. They talk of love without knowing its source. Their naturalistic manner of understanding the universe excludes the Creator and therefore makes no sense. Despair is almost a logical consequence of their limited vision of the universe.

These doomers entrap themselves by allowing the environmentalist cause to define their lives. Even if it leads to despair, they still see this skewed vision as preferable to a life without any meaning. Embracing true Christianity is a psychological risk that they are unwilling to take.

In Matthew 16:24, Our Lord said, “If any man will come after me, let him deny himself, and take up his cross, and follow me.” That denial of self is precisely the step that activists will not risk. Thus, everything takes on a sense of doom.

Visit our other sites