Old Man Winter, it turns out, is no friend of renewable energy. This time of year, wind turbine blades ice up, biodiesel congeals in tanks and solar panels produce less power because there is not as much sun. And perhaps most irritating to the people who own them, the panels become covered with snow, rendering them useless even in bright winter sunshine.

So in regions where homeowners have long rolled their eyes at shoveling driveways, add another cold-weather chore: cleaning off the solar panels. “At least I can get to them with a long pole and a squeegee,” said Alan Stankevitz, a homeowner in southeast Minnesota. 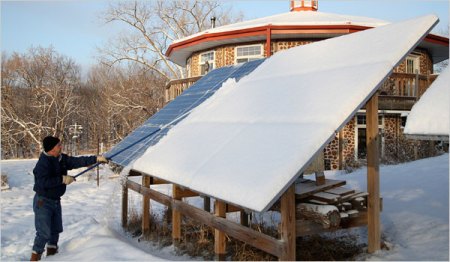 As concern has grown about global warming, many utilities and homeowners have been trying to shrink their emissions of carbon dioxide – their carbon footprints – by installing solar panels, wind turbines and even generators powered by tides or rivers. But for the moment, at least, the planet is still cold enough to deal nasty winter blows to some of this green machinery.

In January 2007, a bus stalled in the middle of the night on Interstate 70 in the Colorado mountains. The culprit was a 20 percent biodiesel blend that congealed in the freezing weather, according to John Jones, the transit director for the bus line, Summit Stage. (Biodiesel is a diesel substitute, typically made from vegetable oil, that is used to displace some fossil fuels.) The passengers got out of that situation intact, but Summit Stage, which serves ski resorts, now avoids biodiesel from November to March, and uses only a 5 percent blend in the summertime, when it can still get cold in the mountains. “We can’t have people sitting on buses freezing to death while we get out there trying to get them restarted,” Mr. Jones said.

Winter may pose even bigger safety hazards in the vicinity of wind turbines. Some observers say the machines can hurl chunks of ice as they rotate. Read more here.